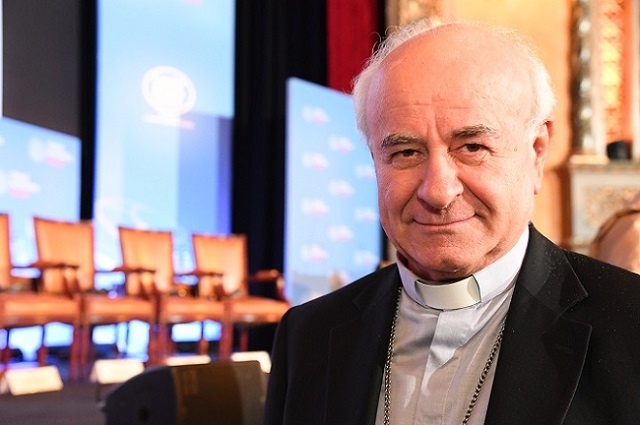 Vincenzo Paglia, an Italian Archibishop,  served as parish priest in the Basilica of Santa Maria in Trastevere in Rome from 1982 to 2000; he was also the ecclesiastical assistant of the Community of Sant’Egidio and was the postulator of the cause of beatification of the Archbishop of San Salvador, Saint Oscar Romero.

On 2 April 2000 he was ordained as Bishop of Terni Narni Amelia in the Cathedral of St. John Lateran. Since 2002, he is president of the International Catholic Biblical Federation and, from 2004 to 2009, he was also chairman of the Commission Ecumenism and Dialogue of the Italian Episcopal Conference.

For his work in peace he received, in 1999, the UNESCO’s Gandhi Medal in 2003 the Mother Teresa Prize of Albanian Government. He also received the Ibrahim Rugova award from the Kosovo government and the “Noble Amigo” award from the Government of El Salvador. He has collaborated with the Department of Contemporary History at the Sapienza University of Rome and has published studies and articles on the social and religious history as well as on the history of poverty.

RT @HPCA_SA: Samuel went to the clinic for a check-up and discovered that he had cancer. Samuel is also HIV positive and was diagnosed in 2…

RT @HPCA_SA: The #palliativecare Samuel is receiving means he doesn’t have to face his illness alone. There’s transport for him to get to t…

RT @HPCA_SA: Palliative care is an essential service to relieve pain and suffering related to COVID-19 and pre-existing health conditions.…